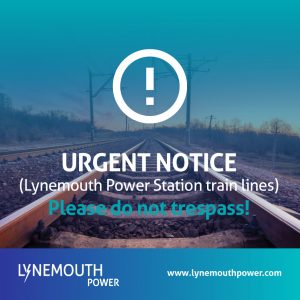 Members of the public are once again being urged not to trespass on railway lines coming in and out of Lynemouth Power Station, especially those who may be unfamiliar with the area and visiting over the summer months, as well as young people enjoying their school holidays.

Heightened safety warnings are once again being issued for people not to trespass on the tracks as they are fully operational with trains arriving at the power station on a daily basis.

The railway line stretches from the Port of Tyne directly to Lynemouth Power Station, passing through areas including Ashington, West Sleekburn and Woodhorn. Should members of the public need to cross, they are being urged to use the designated safety areas, be extra vigilant and only proceed when safe to do so.

Daryn Campbell, Operations Manager at Lynemouth Power Station, commented, “We are reissuing and heightening our safety notices as we are aware of people, on occasions, still accessing the railway lines. We urge members of the public to take heed of this advice, especially over the forthcoming weeks when we have a lot of people visiting the local area and youngsters on summer breaks. We are also asking that parents ensure their children are fully aware of the risks at all times.

“These are very dangerous and prohibited areas and given that trains are now running at very regular intervals throughout the day, we are asking everyone not to trespass or enter the private land to the south of the plant including the lagoons.”