Carbon Brief provides regular analysis of the UK’s electricity systems in addition to its news coverage of global climate science, climate policy, and energy policy. The site is dedicated to ‘improve the understanding of climate change, both in terms of the science and the policy response’ and, earlier this month, published an analysis of UK electricity generation data from BM Reports, Sheffield Solar, and the Department for Business, Energy and Industrial Strategy (BEIS). 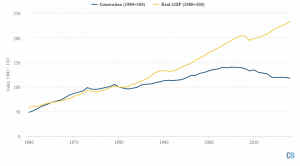 Similarly, UK electricity generation continues to track away from traditional economic orthodoxy, which states a growing economy must be matched by a growing use of electricity. In fact, as can be seen below, the break between generation and GDP split decades ago, in 1980, since when the economy has expanded more than two-fold.

At the same time as this decoupling is taking place, so too is a significant decline in the use of fossil fuels — especially coal, which has taken a hard nosedive ever since 2012. Low-carbon sources accounted for a record 53% of the total electricity generated in 2018, according to Carbon Brief, a new record thanks in large part to strong growth in the UK’s wind sector, which increased by 16% to generate 58 TWh in 2018. Offshore wind capacity nearly doubled over the course of 2018 and more are set to open in 2019, while solar generation increased by 11% to reach 13 TWh in 2018.

“A record one-third of the UK’s electricity is now coming from renewables, and fossil fuels are continuing to decline. This is one of the best examples of our country taking real action against climate change and we can all be proud of it.” said RenewableUK’s Deputy Chief Executive Maf Smith.

“More than 50% of the UK’s power now comes from low carbon sources thanks particularly to growth of onshore and offshore wind, which is a great way to start 2019, but we need to continue building renewables in the years ahead to maximise our natural resources.”