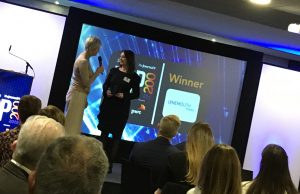 Lynemouth Power Limited (LPL) has been named winner at the North East’s Top 200 event celebrating the very best of the region’s businesses.

The annual awards ceremony, organised by Reach plc, owners of The Journal and Teesside Gazette and held at St. James’ Park Newcastle, unveiled the North East’s most successful, influential and important companies of 2019, many of which are operating at the forefront of their respective industries.

Finance Director, Deborah Walton commented, “This is a fantastic achievement for Lynemouth Power Limited and one which all staff should be incredibly proud of. To be named as one of the top 200 companies in the North East is a fantastic achievement and one which reaffirms our position as a key employer and flagship site for renewable energy in the UK.”